This weekend, the nation’s gaze will shift to a small town in country NSW that hosts Australia’s largest motorsport event. Despite being a few months late you will be hard-pressed to find a person who doesn’t get caught up in the hyperbole, TV montages and buzz around the Repco Bathurst 1000.

According to Gemba’s research, 21% of Australians are fans of Supercars (4.4m), with this number remaining stable in a sports market that has experienced a softening in interest over recent years. Despite this stable audience, the challenge for Supercars is twofold, firstly how to increase familiarity with the sport to grow the number of prospective fans and secondly how to leverage live events, broadcast and other touch points to convert these prospects into engaged fans. This year’s event is likely to be a new dawn for Supercars, with six days of racing peeling back the curtain on the future of Supercars. New drivers will be thrust into the spotlight, new ownership will supersize Supercars and a new generation of cars will signify the beginning of a new chapter of racing for fans.

Much like the Bathurst 1000, the name Jamie Whincup is synonymous with Supercars and after more than 500 races and 7 championships, Sunday’s race will be his last. You will see countless tributes to what many call the G.O.A.T of modern-day Supercars and I guarantee if you watch the coverage on Sunday, you will hear the commentators talking about “a changing of the guard”.

Sunday’s race will showcase the significant changing of the guard that is currently occurring, a lot of the names you will see and hear will be unfamiliar, though will quickly become the face of the sport. Two-thirds of the Supercars field will be aged under 30 and a third under 25. While they may not be household names yet, the new guard has well and truly arrived, and you will see them feature sooner rather than later. The likes of Anton De Pasquale and Cam Waters are already dominating racetracks around the country, collecting poles and podiums. Though look a little further down the field and another wave of young talent is chomping at the bit to take over.

Rookie Will Brown at only 23 years old won the race of the year at the recent Sydney SuperSprint event, holding out Jamie Whincup to win his first Supercars race (his teammate and fellow rookie Brodie Kostecki is not far behind either). The future is bright, and the talent pool is deep, as fans we need new heroes (and villains) to get behind and this will be key for Supercars in growing its mainstream fan base.

Supercars broadcast relationship with Seven provides it with the ability to reach mainstream sports fans, providing the opportunity for significant cross promotion opportunities e.g AFL. Think Cam Waters as a guest commentator on the AFL coverage, Chaz Mostert on Dancing with the Stars or Brodie Kostecki taking on the challenges of SAS. Seven’s long-term commitment to the sport is another important pillar for growth, taking Supercars drivers from behind the wheel and into the mainstream.

The second big storyline influencing Supercars’ future is the sale to a new ownership group that already have an existing investment in motorsport. Over the past few years, the Australian motorsport landscape has become somewhat fragmented with two major players vying for sponsors, tracks, fans, and TV audiences. While Supercars has remained the leading motorsport category in Australia, the competing Australian Racing Group headlined by its globally relevant TCR category has increased the competitive tension within the sport. 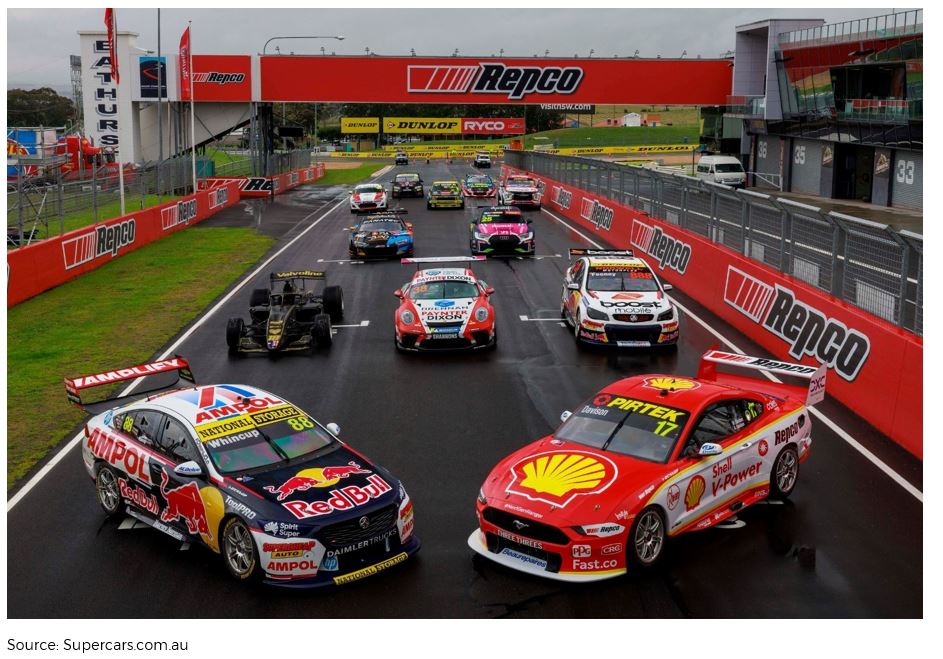 The new owners of Supercars, RACE (a consortium consisting of the Australian Racing Group) should bring together the best of motorsport in Australia. This will have significant benefits for existing Supercars fans as well as expanding the sports audience to those interested in categories that weren’t aligned with Supercars.

Bathurst will be the first event since the sale and the benefits will be on full display, with six days of racing, ten different categories, all headlined by the 161 lap Mount Panorama main event on Sunday.
Fans over the weekend will likely see cars they wouldn’t associate with Mount Panorama such as a Mercedes AMG in the Australian GT category or a hotted-up Hyundai i30’s in TCR. This is an exciting new chapter for fans as it provides the opportunity to highlight the power and excitement of Supercars, complemented by the innovation, relevance and diversity that is present within other major motorsport categories.

Relevance is an important word and has been a knock-on Supercars over the past few years. The move away from V8’s and sedans, towards smaller more efficient cars, has left the sport without cars that everyday Aussie’s drive. The appeal of seeing road cars compete on the track was the foundation for the golden years of Supercars and is well represented in the phrase “Win on Sunday and sell on Monday”.

The world of motorsport has changed dramatically since the turn of the century and the time is right to evolve what Australian’s perceive Supercars to be. While the heritage of Holden and Ford will surely remain, the future needs to show off the innovation, tech and excitement that encompass Supercars in 2021 and beyond.

On Saturday, we will get a glimpse into the future when Supercars unveils its new Gen 3 car. Much has been made of the development of this new model that will launch during the 2023 season, the Mustang remains, however the Commodore will be replaced by the Camaro. While the holding companies, Ford and General Motors remain consistent the cars we will see are now what you’d expect from a modern-day sports car. Long term this will help shift perceptions and positioning of Supercars from attainable to aspirational, good value to premium. Those involved with the sport already know this about the Supercars, the challenge is engaging the 2.69m Australians who are fringe fans that will help stimulate the next wave of fan growth.

This year’s Bathurst 1000 is unique for several reasons, being the largest ever and the latest ever event, but more importantly, it is a unique chance to observe where Supercars is going. Over the weekend as you watch Jamie Whincup take on Mount Panorama for the final time, make sure you keep an eye on the young guys behind him, check out the plethora of support categories that show off the best of Australian motorsport and most importantly get excited about the new Gen 3 Supercar.

Ensuring that Supercars continue to bring new fans into the sport is crucial to its long-term health, three key aspects will influence this. Firstly, the next generation of stars need to become household names, secondly, Supercars races need to be considered as more than just one race and rather a first-class sporting experience that showcases the best of Australian motorsport and finally the cars on track need to inspire and excite all sports fans, not just those previously engaged with motorsport.

As the 2021 season wraps, Supercars’ future looks bright as it welcomes a new dawn.